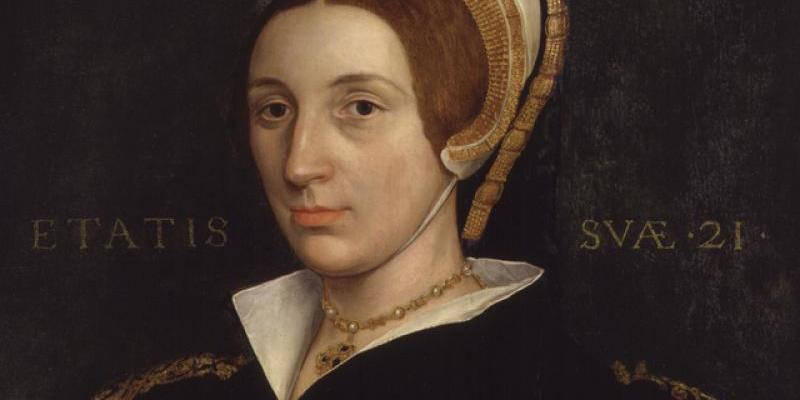 When Catherine Howard, Henry VIII’s fifth wife was put on trial for adultery, most of the evidence came from the girls who shared a younger Catherine’s rooms and witnessed her pre-marital escapades. The only evidence from Catherine’s own hand was a letter she had penned to her lover, Thomas Culpeper, which was found among his belongings after he was arrested. It is also, the only surviving letter that we have of Henry’s fifth Queen. Yet when reading over it, I was thinking about what the letter tells us about Culpeper.

Opinion on Culpeper is divided. Often he is shown in a sympathetic light, as Henry VIII’s favourite courtier who had the unpleasant job of dressing the king’s ulcerous leg. Historically we know that he also raped a woman and killed her husband when discovered. The Tudors television series shows him as a rather dark character, who has something of a controlling relationship with Catherine.

When they were arrested, both Catherine and Culpeper gave contradictory testimony, each blaming the other for the continuation of the relationship. Each said that they would have finished the affair, if it weren’t for the other dragging them back into it. The letter supports Culpeper’s version of events, which places the responsibility for the relationship squarely with Catherine. What I found interesting, and perhaps telling, is that even if Catherine were entirely to blame and Culpeper did not want anything to do with her; why did he not throw away the letter? The letter was written early in 1541 which means Culpeper kept it for at least nine months before his death. Ultimately he kept something which was so incriminating it would (and did) lead to his death. Bearing in mind that the court moved around on summer progress, so at times it would have been easier for him to dispose of it rather than try and keep it hidden.

Master Culpeper,
I heartily recommend me unto you, praying you to send me word how that you do. It was showed me that you was sick, the which thing troubled me very much till such time that I hear from you praying you to send me word how that you do, for I never longed so much for a thing as I do to see you and to speak with you, the which I trust shall be shortly now. That which doth comfortly me very much when I think of it, and when I think again that you shall depart from me again it makes my heart die to think what fortune I have that I cannot be always in your company. It my trust is always in you that you will be as you have promised me, and in that hope I trust upon still, praying you that you will come when my Lady Rochford is here for then I shall be best at leisure to be at your commandment, thanking you for that you have promised me to be so good unto that poor fellow my man which is one of the griefs that I do feel to depart from him for then I do know no one that I dare trust to send to you, and therefore I pray you take him to be with you that I may sometime hear from you one thing. I pray you to give me a horse for my man for I had much ado to get one and therefore I pray send me one by him and in so doing I am as I said afor, and thus I take my leave of you, trusting to see you shortly again and I would you was with me now that you might see what pain I take in writing to you.
Yours as long as life endures,
Katheryn.
One thing I had forgotten and that is to instruct my man to tarry here with me still for he says whatsomever you bid him he will do it.

It’s hard to take a hiatus for health reasons when history insists on being made in front of us.

See you every other Tuesday (mostly)