Throughout history the rich, especially royalty have used the medium of stained glass to promote their image. The relationship between monarch and stained glass is explored in depth in The King’s Glass: A Story of Tudor Power and Secret Art (2007) by Carola Hicks if you are interested in such things. It’s a genuinely interesting read about the secret messages woven into public stained glass to spread particular images of the monarch, propaganda almost. I, of course, am interested in the queens who rarely feature as much as their husbands in the public image. So I have collated this gallery of lovers for your viewing pleasure… 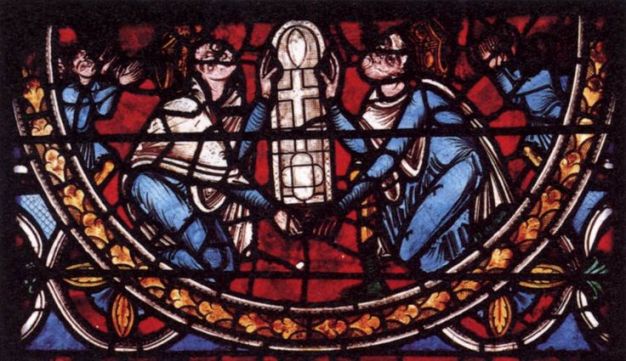 Eleanor of Aquitaine and Henry II of England. Their relationship has gone down in history for its turbulence. Though initially very much in love, Henry’s repeated infidelities and his treatment of their sons led Eleanor to revolt against him. Henry had her imprisoned for sixteen years before his death and the accession of their son Richard, released her. Window at Poitiers Cathedral

Henry V and Catherine of Valois. Supposedly Henry fell deeply in love with Catherine after his great victory at Agincourt. The marriage however was short lived and the two saw little of each other. Henry returned to France to wage war and died within two years of marrying Catherine, never seeing the child she became pregnant with (Henry VI). Catherine went on to have an affair with her Welsh servant, Owen Tudor with whom she had Edmund Tudor (father of Henry VII) and Jasper Tudor. Glass created by http://www.materialsunlimited.com/

Isabel Neville and George, Duke of Clarence. This marriage came about as a plot between George, Duke of Clarence the brother of King Edward IV and Isabel’s father, Richard, Earl of Warwick. Warwick, ‘The Kingmaker’ supported George’s plan to take the throne if he would marry his daughter, making her queen. While George never became king, the union produced four children. The marriage lasted seven years until Isabel’s death aged just 25. Window at Cardiff Castle.

Edward IV and Elizabeth Woodville Supposedly the two fell in love when the widowed Elizabeth stood under a tree in the king’s path to petition him. The two were married after she refused to become his mistress and were thought to be very much in love with each other, despite Edward’s infidelities. The two were married until Edward’s death when his brother Richard declared the marriage invalid so he could take the crown from their son, Edward V. Window at Windsor Castle.

Richard III and Anne Neville Isabel’s sister, Anne Neville was also married off as part of her father’s schemes to win the throne of England. Though she was married to Henry VI’s son Edward of Westminster, she was widowed five months later when her husband was killed in the battle for the throne. It is unsure whether Richard III married her for love or for her vast inheritance but he certainly acted as though it was the former even though he gained the latter. Anne died two years after her husband became king of England. Window at Cardiff Castle 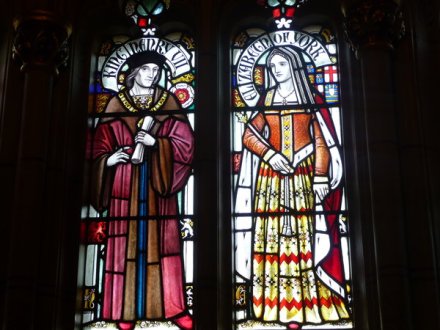 Henry VII and Elizabeth of York Although an arranged marriage between the houses of York and Lancaster to end the Wars of the Roses for good, Henry VII and Elizabeth of York have gone down in history as one of the most successful and loving marriages in history. The two had seven children and were married until Elizabeth’s death in childbed, something which hastened Henry’s own death and left him distraught. Window at Cardiff Castle

Jasper Tudor and Katherine Woodville The son of Catherine Valois and Uncle of Henry VII, it is unknown how Jasper Tudor or Katherine Woodville felt about their marriage. Katherine was Elizabeth of York’s aunt and it is likely Henry VII arranged the marriage out of gratitude to his uncle and to further politically align the families. The marriage had no surviving children and lasted ten years until Jasper’s death. Window at Cardiff Castle.

Mary Tudor on her way to marry Louis XII of France. Charles Brandon also pictured. Arranged by her brother, Henry VIII, Mary Tudor, the most beautiful and eligible princess in Europe was married to Louis of France even though he was almost 35 years his senior. Allegedly Mary only agreed to the union after receiving Henry’s promise that she could marry whom she wanted after Louis’ death. Whether such a promise was extracted or not Louis died less than three months after the marriage and Mary almost immediately married Charles Brandon, Duke of Suffolk. Window at Bury St. Edmunds

Henry VIII and Jane Seymour. Although Henry had six wives, it was third wife Jane who he considered to have been his most loved and ‘true’ wife. Incidentally she was the only one who birthed him a living son. She died shortly after the event, leaving Henry no time at all to grow bored of her and securing her position in his affections. Window at Cardiff Castle

Catherine Parr and her husbands Henry VIII and Thomas Seymour When Catherine Parr decided to marry for the third time she supposedly intended to do so for love and had picked the handsome Thomas Seymour to be her new husband. Henry VIII apparently had other ideas and packed Seymour off on a diplomatic mission abroad and married Catherine himself. Catherine acted as his companion and nurse throughout Henry’s remaining years. When he died she did indeed marry Seymour, but he broke her heart when he attempted to seduce her fourteen year old ward; the princess Elizabeth. Catherine died giving birth to Seymour’s daughter. Window at Sudely Hall 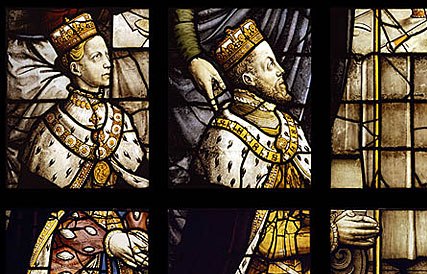 Mary I and Philip of Spain. Due to her inconsistent status as Henry VIII’s daughter Mary did not marry until she was 37, considerably older than the average woman at her first marriage, and crowned queen herself. Her deeply unpopular choice was Philip of Spain who obviously entered into the marriage for political reasons. While Mary fell very deeply in love her affection was not returned and Philip spent much of the marriage abroad. After Mary’s death Philip put himself forward to marry her sister, the new Queen Elizabeth. Window at Sint-janskerk Gouda

Elizabeth I. While she did not marry, Elizabeth was rumoured to have had numerous lovers and continually indicated that she might marry any one of her foreign suitors to maintain the peace. She remained the ‘virgin queen’ for all her life declaring herself married to England. Window at Melford Hall