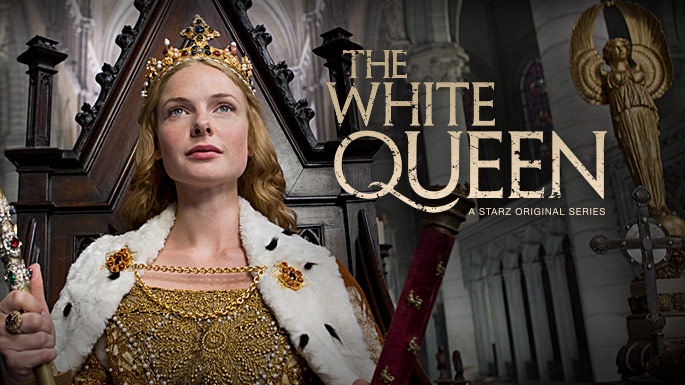 Having settled down for the evening with some toffee popcorn and a bottle of coke to watch All Star Superman, I suddenly remembered The White Queen was showing on BBC one and so hastened to find a different television, abandoning the popcorn in the process.
To be honest, I was not expecting much. The BBC adaptation of The Other Boleyn Girl  utilised some ‘interesting’ filming techniques, and The White Queen isn’t my favourite book of The Cousins’ War series, yet I was very pleasantly surprised.

At first glance, I was dubious. Rebecca Ferguson, playing Elizabeth Woodville, as attractive as she is, did not strike me as the most beautiful woman in Europe, and James Frain as the Earl of Warwick, despite being one of my favourite actors, annoyed me greatly with his loud mouthed interruptions, in an attempt to fill us in of the historical events of Lady of the Rivers.

But despite these early annoyances, and the few filming errors I could not help but notice (I did not realise microphone wires and zips were so common to the fifteenth century) I actually thoroughly enjoyed myself. For a television adaptation I was very pleasantly surprised. The acting was strong and at times, very dramatic. Who would have thought you could fit so much suspense into a scene built around a woman asking another to curtsey.

I was, at first, annoyed at how much the relationship between Edward and Elizabeth was heavily based on the fact that they wanted to have sex, rather than any other emotion (ultimately it is the reason they marry). I didn’t understand why, if their mutual attraction was so strong, they just didn’t have sex without the marriage. After all, Elizabeth was a widow and mother, therefore had no loss of virginity to worry about. They both wanted to, and had Elizabeth not refused to become Edward’s mistress then they would have. But no reason was given for why she would not become his mistress. It is alluded that she was a Lancastrian and Edward a Yorkist king, therefore such a thing would be unworkable, yet surely no less unworkable than a secret marriage? Thankfully the relationship develops quickly, and while the physical aspect is prevalent, it is also clear that they both have very real and genuine feelings for each other.

Promiscuity aside, it was Janet McTeer as Jacquetta Woodville who stole the show for me. Although at times I thought she was a bit heavy on the scheming and manipulation without her love for her family and especially her husband as evident to balance it, she captured Gregory’s character very well. The introduction to her magic was surprisingly pragmatic, and there has been little in the way of actual mysticism so far, but I am looking forward to seeing how this develops.

The fact that I am actually looking forward to the next episode surprises me the most, actually the fact that I am going to watch it is surprising, as a television is something I plug a games console into and I rarely watch any shows. But it was an excellent adaptation of the book, which is why its historical errors are immaterial (yes their clothes are surprisingly clean for the fifteenth century, that’s television for you). I am very much looking forward to how they work in the plot of the other books of the series into the overall story…well I’ll be honest I’m mostly in it for Jasper Tudor.

2 thoughts on “The White Queen”

Regular posting has resumed. Updates every other Tuesday.