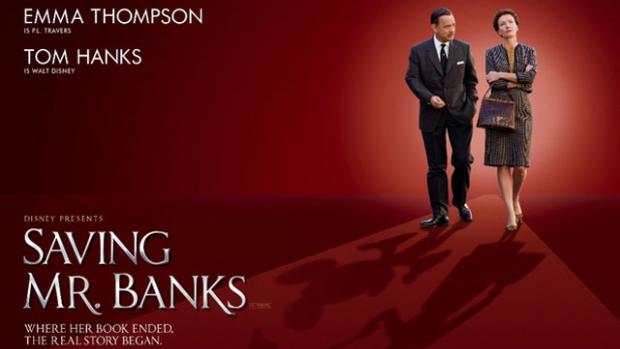 Disclaimer: I love Disney. If I went on Mastermind my specialist subject would be the history of the Walt Disney studios. So much so that when I saw a poster for the recent release Saving Mr Banks (2013) documenting the story around the production of Mary Poppins I had a weird fangirl moment in the thoroughfare, there was squealing involved.

Who’s in it?
Emma Thompson as P.L Travers, Tom Hanks as Walt Disney and Colin Farrell as Travers Robert Goff.

What’s it about?
The development and production of the 1964 film Mary Poppins. This might not sound like the most interesting narrative but actually getting the film into production was a long battle between author P.L Travers and studio owner Walt Disney. Disney wanted to make Travers’ work Mary Poppins into a film, in keeping with the Disney tradition. Travers gave her reluctant permission but the production was a rocky process, mostly as Travers believed the character of Poppins to the complete opposite of everything ‘Disney’. The film dramatises not only the production process but also Travers’ childhood from which she draws inspiration for the characters in Mary Poppins. As the film progresses Travers’ flashbacks become more and more relevant to the film’s production while she becomes more removed from the process and angered with the treatment of her characters.

Should you watch it?
Aye! A thousand times aye! Disney fangirling aside the film is fantastic. The acting is brilliant, the story compelling and even the cinematography is amazing, and I don’t normally notice such things. Some of the scenes are extremely impressive in terms of the way in which they’re filmed and the messages they convey. The use of songs is extremely well done, and from a fan’s point of view seeing how the script for Mary Poppins developed and how the songs were written was fascinating. There was just one moment when we weren’t entirely sure what was going on and that was when the family moved during the flashbacks. We spent a small amount of time wondering from where they had moved, to where they had gone and why the move was necessary in the first place as this was left quite unclear, but we managed to figure it out, mostly.

Accuracy
When the BBC approached Disney with their initial screenplay Disney released the tapes which recorded Travers’ interaction with the production team, these were included in the script and also used to play over a section of the credits. It enforces the strictness of P.L Travers’ character, as Thompson portrays her; she was, by all accounts, a hard woman something which Thompson delivers extremely well. As in real life, Travers childhood plays a prominent role in her life considering her father’s alcoholism and her mother’s attempted suicide. As for Walt Disney, Hanks plays him with the loveable charisma that you would expect from a man who created the Disney empire, but is somewhat lacking in the more ruthless aspect of his character. The film also gives him a more tragic back-story to make him more identifiable to Travers so that their relationship becomes more amicable, when historically they parted on very bad terms.

While the end of the film is quite ambiguous in how Travers reacts to the Mary Poppins film, in real life she hated it so much and her relationship with Disney had suffered so much that she specified that her work would never be adapted by Disney again. Later when she was approached regarding the stage musical Travers consented on the proviso that nobody involved in the film could be involved with the musical. One can only imagine how she would have reacted to a new film that softened her and her relationship with Walt Disney, especially one produced by Disney and involving the Sherman Brothers who had been specifically excluded from assisting in the musical.