Content Warning: Bodies, corpses, cadavers etc. This article looks at unusual ways in which bodies have been preserved. With pictures. I recently heard a line in a film that went along the lines of, ‘however much we don’t want to admit it, we’re fascinated by the macabre, that’s why we stare.’ It’s why we have traffic jams next to car crashes as the passers-by pause to have a good stare. The human body has fascinated for as long as we’ve had it, with a long history of various methods of preservation so that we may learn from it, and stare at it. When the earliest medical museums opened their doors from as early as the 16th century the curators were surprised to find that their visitors were not limited to surgeons, as the average person wandered in to satisfy their curiosity. Museums and fairs followed with their own exhibits until the mid-twentieth century when long-standing ethical concerns triumphed, that it became less common to display actual human remains. That said, the Body Works exhibition which is made up entirely of actual human bodies attracts millions of visitors every year. What happens to our bodies after death is largely very simple. We die – decompose – and spend the rest of our time on earth looking like a bad ass skeleton. But of course, every now and then someone comes along to defy convention and ends up preserved, sometimes entirely by accident. And because this is Creepy History we’re going to look at them.

German sailor Manfred Fritz Bajorat had not been heard from for over a year, while he was undertaking a length sailing trip. His yacht was discovered in 2016 drifting in the Philippine Sea, and his body was found within. Bajorat was found hunched over a desk with transmission equipment beside him in what appeared to be an attempt to radio for help in his last moments.

Given that Bajorat had all but disappeared a year previously, the discovery of a body was not totally surprising. What was surprising is that he had actually died of a heart attack just a week prior to his discovery, rather than the year it was thought that would have resulted in his body mummifying as it had. Scientists believe that it was the weather conditions that saw the process accelerate as much as it had, with the warm, dry air and the salt content able to dry out the skin and naturally preserve the body. 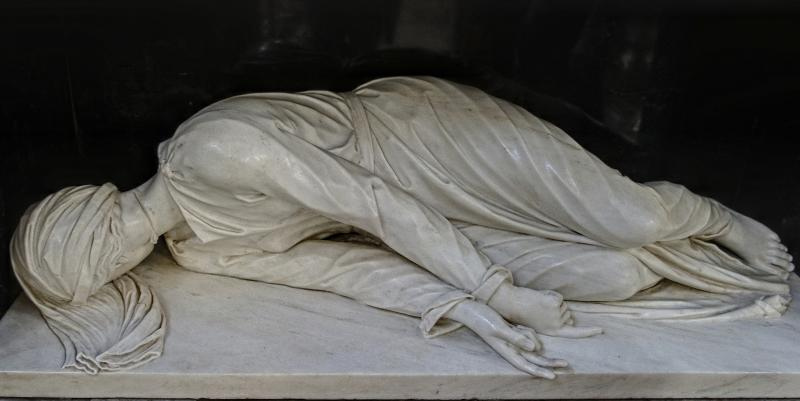 While the details of Saint Cecilia’s life are thought to be embellished, she is considered to have been an actual person who lived in second century Rome. As a Christian martyr, Cecilia was sentenced to execution by beheading. Somehow the executioner landed the three requisite number of blows with an axe but failed to actually remove her head, so instead, he left her to die. A century after her death the Pope had a church built on the alleged site of her home and later, in the ninth century, Cecilia’s body was relocated to this church. In 1599 the Cardinal of Saint Cecilia had her tomb opened so that her body might be examined, only to find that the body hadn’t decomposed in the fifteen centuries that had passed. He commissioned the sculptor Stefano Maderno to create the image of her body, exactly as it was found, and the haunting statue now sits atop her tomb. Cecilia was the first example of a Saint’s body being found ‘incorrupt’ although sanctity aside, it’s far more likely her body was preserved by the embalming process and the natural conditions within her tomb. The statue is supposedly an exact image of the body, as it lies in the tomb, with the wound that killed her still visible on Cecilia’s neck. 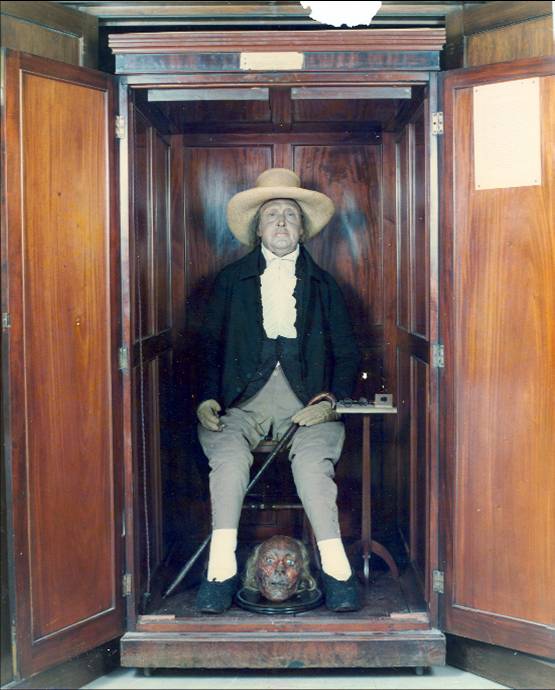 When philosopher Jeremy Bentham died in 1832 he left instructions for his body to be preserved as an ‘auto-icon’. Auto-icon, a term coined by Bentham, referred to the preservation of his body inside a wooden cabinet where it could be put on display. Attempts to preserve the head, however, left preserved, but at looking clearly at odds with the rest of the skeleton. His body was dressed in his clothes, stuffed with hay and topped with a wax model of his head (made with his own hair). Bentham can be viewed at University College London, where he is occasionally brought out for special occasions. Initially, he was displayed with his own head beside him, though the head was moved after repeated student pranks.

Anna Maria Taiga lived in the late 18th/early 19th century and was beatified in 1920. In life the Catholic Anna Maria became a member of the Secular Trinitarians and was supposed to have heard the voice of God on numerous occasions. Within days of her death, her body had become a site for pilgrims and her body came to rest in the Basilica of San Crisogono. Some thirty years after her death her body was found to be incorrupt but her clothes had disintegrated and were replaced. At the time of her beatification her body was found to have started decomposing, and so the visible parts were encased in wax before she was placed inside a glass coffin, where she can still be viewed today.

German aristocrat Christian Frederick von Kahlbutz was an all-round swell guy. Known for having at least thirty illegitimate children with the women of his jurisdiction by invoking an old (and rarely actually practised) custom allowing him to have sex with a woman on her wedding night in lieu of the groom. Peachy. When one of the women refused, Kahlbutz invoked an even less practised aspect of the custom by murdering her husband. The woman accused him of murder and the matter went to court, where it was treated as well as you would imagine for a peasant vs noble in the seventeenth century. Kahlbutz swore an oath of innocence and was good to go, but according to local legend, he added that as God was his witness if he was lying may his body never decay. Well, you can guess how that went. Almost a hundred years after his death, the church in which he was buried was renovated, with all the coffins being relocated to the graveyard. The coffins were examined and it was found that each body had decayed, except that of Kahlbutz. So far there is no sufficient explanation for how the body should mummify without any embalming process and given that the surrounding conditions were obviously not dry enough to preserve the bodies naturally.

The wife of a high ranking Han official, Xin Zhui’s body is considered to be the best-preserved mummy to have been discovered. She was found in 1971 and when her tomb was opened she was discovered to have suffered almost no ill effects (despite the obvious of being dead) from her two thousand year burial. Her skin was still smooth and moist, she had lost no hair, not even from her brows or eyelashes, and unusually for a mummy all her internal organs were intact, and she still had blood in her veins. Her last meal could even be identified from its remains in her stomach, eaten just a few moments before she died and her limbs were still pliable. Xin Zhui is thought to have survived the process for so long because her tomb was practically a vacuum. Inside her coffin, she was wrapped in over twenty layers of fabric and resting in a liquid, thought to be some kind of preserving agent. This box was placed inside another, placed inside another, placed inside another, with each additional coffin containing rocks to absorb any moisture. The tomb was buried in clay and soil which formed another layer against any oxygen, but which also meant that as soon as she was exposed to air her body began to rapidly decompose.

In 1850 a rescue party searching for Sir John Franklin’s Arctic expedition which had been missing for two years discovered the graves of three crew members in the remains of a camp. The three graves belonged to John Torrington, John Hartnell and William Braine, but unlike the majority of the crew who died in 1848, these three died early in the expedition in 1846. The graves were left alone until the 1980s when the bodies were exhumed in order to answer questions regarding the expedition. All three men were found well preserved due to the icy conditions within their graves and it was thought that much of the decay had occurred while the bodies were stored on their ship, waiting for their resting places to be prepared, in the case of Hartnell there was evidence that he had been previously thawed and autopsied. Hartnell and Braine were found to have died of lead poisoning, where Torrington died of pneumonia (exacerbated by elevated lead levels in his blood). The lead is thought to have come from the drinking water and the quantity of tinned food consumed on the voyage. If you’d like to join me for more fun and games in picking apart history, and other behind the scene tangents, you can support me via my Patreon.