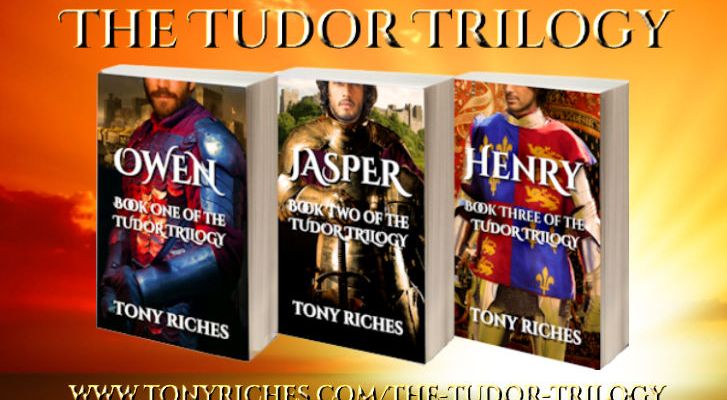 I had planned to review OWEN on its own. Indeed, I get so little time to read these days I set aside three weeks to do so. When I opened OWEN I thought it might be a bit of a slog – not because the book looked like it would bore me, on the contrary, I’d been eagerly awaiting its arrival, but because it is written in the present tense, “I am walking, she is saying, he looks at me,” etc. That’s just personal preference on my part and I usually struggle with that particular style.

Then I started reading and by chapter three it’s safe to say I was hooked. I read OWEN in a day, in two sittings, barely looking up. By the end of the day, I had finished OWEN and had the next two books, JASPER and HENRY on order. I even paid extra for next day delivery. It’s not that novel ended on a cliffhanger, I was just thoroughly captivated by Riches’ Tudors.

OWEN (obviously) tells the story of Owen Tudor; grandfather of the dynasty, the Welsh servant who married a French Queen. The events are largely historical and the parts that need to be imagined and embellished are done so with such fluidity unless you really knew the subject matter you wouldn’t be able to tell where history ends and fiction begins. I mean that as a huge compliment as it shows the deep awareness Riches has of the period, that the fictionalised elements are entirely in keeping with what little we do know of Owen Tudor.

Owen is the patriotic Welshman, diligent servant and adventurer we see him as in legend. He doesn’t appear as charismatic as I imagined him to be, but he is personable and his story is captivating, following him from joining Catherine’s household to his death at the Battle of Mortimer’s Cross.

The events of JASPER pick up where OWEN left off. Lancaster has suffered a crippling defeat at Mortimer’s Cross and Jasper has retreated into his lands in Wales to escape. Unlike OWEN, JASPER is written in the third person, which I personally found easier to read. That said, I didn’t feel as connected to Jasper, though I couldn’t tell you why, as I thought it was an excellent portrayal of the character. You really get a sense of the desperation, at points, of the Lancastrian cause, and the remoteness of Queen Margaret’s position. You also can really appreciate how fundamental Jasper was to the establishment of the Tudors, through his unswerving loyalty to Lancaster, even though at times it feels like he is the only noble fighting for it.

There were times when the pacing felt a little slow, as there is a lot of retreating and regrouping at length. That is hardly the fault of the author, as it’s simply a fact of the period – thirty odd years of back and fore-ing. The throne passed between Henry VI and Edward IV four times in ten years so there was a lot of action to be done. I think this is why I struggled to get to grips with JASPER, though when there is action it is gripping and I positively breezed through the Lancastrian bouts of power. I should note that despite the continuous reversal of fortunes I was never left confused as to who was who or who was doing what, which is more than I can say for most books on the subject, fiction or non-fiction.

I thought JASPER might end after his exciting escape from Pembrokeshire with Henry in tow, with the two heading into exile, but it continues all the way to the Battle of Bosworth where Henry becomes Henry VII.

The closing scene of JASPER has the titular character see them victorious at Bosworth, seeing Henry proclaimed king by the men. The third book, HENRY, continues from this very point – the men are still shouting, Jasper is still cheering, except now we have it following Henry instead of his uncle.

From the off events seem to move at a far quicker pace than the previous two books. As HENRY encompasses the whole of Henry VII’s twenty-four year reign, it’s not surprising that this is the case – though it does mean some parts feel like they’ve been skimmed over. That said because the book covers all the major, and some of the lesser known, events you really get a good feel for Henry’s reign as a whole and his struggle to feel truly secure.

I think what I enjoyed most about these books was the very human portrayal of these figures, they are not reduced to stereotypes. Margaret Beaufort is devout without being fanatical, Elizabeth of York is beautiful without being dumb and Henry is cautious with money without being a grasping miser.

HENRY is a rather personal portrait of Henry, looking at him as a husband and father, as well as the king. I didn’t expect to enjoy HENRY; he’s my favourite monarch, the reason I studied history and I’ve yet to find anyone do him justice. But I adored this portrayal. I couldn’t put HENRY down once, once I’d started I was so engrossed which saw me take the book along to the gym rather than lose a moment of reading. HENRY is easily my favourite book of the trilogy, which I really did not expect, but also now one of my favourite historical fiction novels.
Well researched, believable and accurate The Tudor Trilogy is a must for those who love the early Tudors as much as Tony Riches evidently does. While I was writing this review, Riches released a new novel, MARY Tudor Princess, which picks up where HENRY ends following Henry VIII’s sister Mary, which personally I cannot wait to read, along with his other Wars of the Roses contributions.

For more information about Tony’s other books please visit his popular blog, The Writing Desk and websitewww.tonyriches.com and find him on Facebook and Twitter@tonyriches. The Tudor Trilogy is available on Amazon UK  Amazon US and Amazon AU

You can also check out Tony’s guest post here and the history of Owen Tudor here.

Disclosure: I received a copy of OWEN from the author, free of charge, to review. I bought JASPER and HENRY myself, as stated in my review.

Taking a few weeks to recover from the dreaded covid-19 before updating resumes every other Tuesday :D